Cleaning Metal Stampings Is Critical to Its Finish and Function

Cleaning Metal Stampings Is Critical to Its Finish and Function

The metal stamping process leaves residues, such as lubricants, metal shavings, and dust, on the stamped parts as they come out of the presses. These contaminants could affect the part’s function, so they must be removed before the parts can be sent for secondary operations such as metal finishing or welding or directly to the manufacturing line.

Metal stampers typically offer a range of cleaning services in-house, but they may call on other approved suppliers for highly specialized cleaning services. In some cases, more than one cleaning operation may be required, both after stamping and again after metal finishing to ensure its optimal function.

According to Cimcool Fluid Technology in Cincinnati, which specializes in cleaning fluids for metalworking, “One of the most critical operations in the metal forming process is the preparation of the formed metal part for a finishing operation. Whether the part is to be plated, painted, chromated, or e-coated (electrostatically applied coating), the quality of the final finish depends on the effort expended to achieve a proper cleaning that is compatible with the finishing process.” Cimcool also points to stringent testing programs implemented by automotive manufacturers to test the effectiveness of the cleaning method for the stamped parts, both after cleaning and after the part has been welded, primed, and painted.

Two of the most frequently used cleaning processes for metal stampings are degreasing and passivation, which are described below. Cleaning processes that involve the removal of metal from the part, such as electropolishing and deburring, are covered in separate articles.

Aqueous degreasing can be done by either in-line spray or by immersing the parts in an acidic or alkaline water-based cleaner to remove stamping fluid. Ultrasonics may be used in immersion to aid in removing residues.

Vapor degreasing involves placing cold parts in the degreaser to be steamed by solvent vapors that condense on the part and dissolve oil and other contaminants. The parts are heated until condensation stops and the solvent drains off. Other options in vapor degreasing are to immerse the part and add rotation or use Ultrasonics for smaller complex or fragile components.

Degreasing operations have become more environmentally friendly, as less toxic solvents can be used and the run-off oils can be distilled and processed. Vapor degreasing is compatible with many metals, including stainless steel, galvanized steel, aluminum, copper and bronze. Vapor degreasing is suitable for more fragile stampings that cannot be tumbled or those that require a more intensive cleaning method, such as medical device parts. Aqueous degreasing is appropriate for parts that have been stamped with water-soluble lubricants.

Passivation involves immersing the stamped metal parts into a nitric or citric acid bath to remove free iron and other contaminants that may have been introduced during the stamping process. The treated part, which is rinsed and dried following the acid bath, forms a chromium oxide film that resists rust and corrosion and can enhance sterilization. Passivation does not change the appearance of the part.

Passivation is suitable for high volumes of parts that require rust resistance, but does not provide the same smooth appearance or level of corrosion resistance as the more expensive electropolishing. It is primarily used for stainless steel parts, although titanium and other metals may undergo passivation. However, some metals, such as aluminum, copper, and carbon steel, cannot withstand certain acids.

Selecting the right cleaning process requires an understanding of the type of metal material, the strength or fragility of the stamping, its size, the level of cleanliness required, and the type of metal finishing that will follow stamping. In addition, many manufacturers adhere to environmental standards that preclude the use of certain cleaning solvents. Metal stamping engineers can provide guidance on the cleaning and finishing options that will be most effective for the stamped part’s specifications and compatible with industry quality standards. 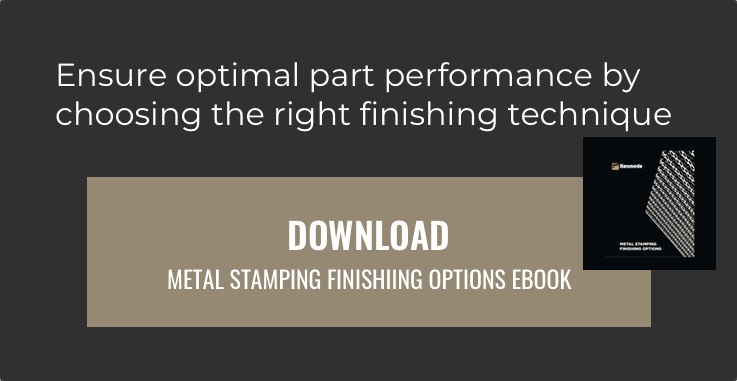