Copper vs Aluminum Busbar — Which Is Right for Your Project? 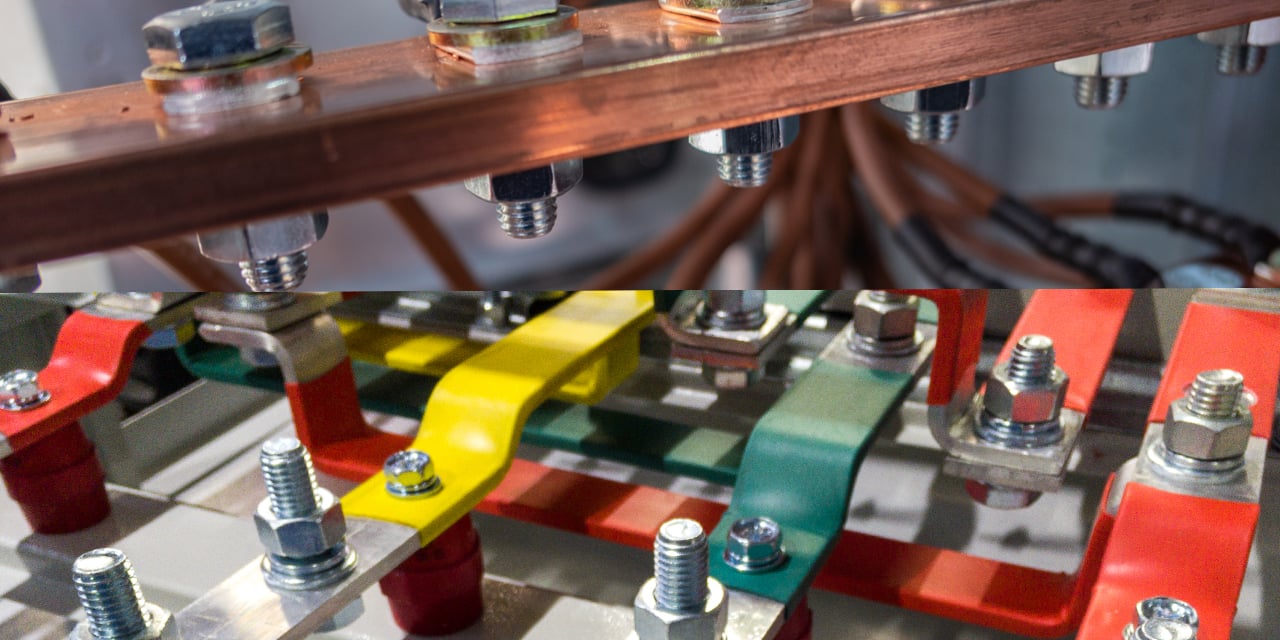 There is some debate regarding which material is better for use for busbars—aluminum or copper. Both materials have been used with success, but which is better? Or is one better than the other? Which is best for your project?

Busbars have evolved over the last 50 years. That evolution has allowed the use of busbars to surpass the use of hard-wired power distribution. Recent innovations have led to a shift from the demand for copper applications to aluminum ones. The trend seems to be to move back and forth from aluminum to copper.

There are misconceptions regarding the value of aluminum in busbar manufacturing. However, despite arguments that copper is a better choice, either material meets demand when manufactured to industry and environmental standards and installed correctly.

Let’s compare copper to aluminum so that you can make an informed decision regarding your next busbar application.

Copper is the most common conductive metal other than silver and is therefore considered the international standard for conductivity. It’s one of the oldest known materials and, as such, has been used in applications where ductility and conductivity were essential requirements. Early experimenters like Benjamin Franklin used copper when conducting experiments with electricity.

In 1913, the International Annealed Copper Standard (IACS) was adopted so the conductivity of other metals could be compared to that of copper. Based on this standard, pure annealed copper has a 100 percent conductivity rating. Since processing technology has changed and improved since the standard was created, today’s commercially pure copper can have a higher IACS conductivity value.

Another benefit to using copper is its tensile strength as well as its thermal expansion and thermal conductivity properties. Copper is resistant to corrosion caused by most organic chemicals. The green patina that can form after being exposed to the atmosphere for long periods of time is a protective surface that doesn’t change how copper performs.

In the 1960s and 1970s, a specific grade of aluminum was popular for use with household wiring. However, poor workmanship in combination with physical property differences between aluminum and copper caused fire hazards. The industry responded by adjusting aluminum alloys to have properties that are more like those of copper.

Aluminum can be much lighter than copper—up to 70 percent more lightweight. Even if a significantly larger aluminum component is required, the resulting weight will still be less than a copper system of the same conductivity rating. The reduced weight of aluminum helps to save costs in a variety of areas. Aluminum requires fewer supports to secure the busbar; transportation costs for aluminum are reduced, and fewer people are required to install aluminum.

Aluminum does require more surface area for conductivity than copper does. That means that aluminum components are larger. So much larger, in fact, that the overall dimensions may restrict the use of aluminum in certain applications. For example, small buildings or underfloor applications may be prevented by the sheer size of the aluminum busbar system.

Comparisons Between Copper and Aluminum

It’s essential to understand how the individual metals compare when it comes to factors like price, electrical ratings, environmental sustainability, and connectivity. Depending on the project, these factors may tip the scale toward one or the other of the metals.

When it comes to electrical ratings, copper takes the win when compared by volume to aluminum. Copper has lower power loss, voltage drop, electrical resistance, and a higher ampacity compared to its aluminum counterpart. All of these contribute to the efficiency of the busbar system.

However, if the comparison is based on weight, aluminum is more efficient. If sizing isn’t an issue, then aluminum is the less-dense, efficient choice.

There is a significant cost difference between copper and aluminum, with the price of copper being much higher than aluminum. Both materials are influenced greatly by political and economic factors as well as consumer demand. The resulting price volatility can affect the accuracy of cost estimates for busbar production. In the past, aluminum was less affected by outside factors allowing for more stable and accurate pricing, but that is no longer the case.

Both copper and aluminum are recyclable metals. However, their environmental sustainability is affected by the way each one is recycled and how they are mined.

Of the two metals, aluminum is the most recycled. Approximately 75 percent of all aluminum that has been produced is still being used. Copper falls a little shy of that at 65 percent still being used or available to be used.

The recycling process for aluminum vs that of copper also presents a slight edge in favor of aluminum. The process for recycling aluminum uses approximately 5 percent of the energy required for initial production. Meanwhile, the same amount of copper uses 15 percent of the mining and extraction energy in the recycling process. What does that mean? Aluminum is arguably the more environmentally sustainable of the two metals.

Copper is still used more often than aluminum for building wire, electronic cables, or other products that require high conductivity. It’s also more commonly used than aluminum for conductors in power generation and distribution as well as in automotive applications.

Aluminum is more commonly used when the lightweight property of the metal is essential. Aircraft commonly use aluminum, and so do overhead utility transmission lines.

Large coaxial cables can take advantage of the properties in both. How? They can be constructed from copper-clad aluminum wire, which allows for the conductivity advantages of copper combined with the lightweight properties of aluminum.

The debate between copper and aluminum for use in busbar construction is ongoing. Both metals have attributes that are beneficial to the application. Copper typically has a higher conductivity rating, while aluminum is more lightweight and less costly.

It would seem that either metal is appropriate for use with busbars. The question then becomes which properties are beneficial to the particular project at hand.