The Importance of Following MSA and GR&R Quality Standards

It’s tempting to think that all precision metal stamping companies and component manufacturers with the right certifications are doing the right thing with their quality measurement programs, but that assumption may be wrong.

Although the Automotive Industry Action Group long ago standardized Measurement System Analysis (MSA) for its suppliers, and other industries have adopted similarly high standards, both academic research and real-life experience indicate that the theories of MSA aren’t always put into practice.

The theory is that all measurements contain error, so MSA is employed to manage error and ensure quality in both the manufacturing processes and the products that result.  The five parts of MSA are bias, stability, linearity, and gauge repeatability and reproducibility (GR&R).

The implications of any one supplier in the chain failing to follow MSA principles can be immense.  Perhaps the worst example of a metrology mishap took place in 1999, when NASA lost a $125 million Mars orbiter because an outside engineering team used English units of measurement while NASA used the conventional metric system, leading to the failure of a key spacecraft operation.

In the global marketplace in which we operate, every supplier must be able to demonstrate that they are using gauging based on international standards – with the exact same measurements.  Even something as seemingly simple as a windshield wiper blade can fail if one part is off.

Gaps in MSA in Manufacturing are Common

If such real-world examples were not enough, a 2007 study of industry practices, published in the Journal of Industrial Technology, found a gap between “the actual use of measurements by manufacturing professionals and the theories of gauge control in measurements.”   Sadly, the gap between theory and practice was reported even in ISO and Six Sigma certified firms.

How can you know that MSA principles are being followed by the precision metal stamping company with whom you work? Ask for proof. MSA should be employed every time a new job requires tooling, beginning with a control plan that lists the measurements to be taken during the process and the critical “classification of characteristics” required by the client.  Most companies do not require all five parts of MSA, focusing mostly on GR&R, but all set a maximum tolerance for acceptable variation.

GR&R requires both repeatability (the same operator gets the same reading on different runs) and reproducibility (different operators get the same reading on different runs), with sufficient numbers of measurements given to ensure the client that their tolerance levels are being observed. Manufacturers typically ask for MSA reports upfront, but it’s just as important to take the same measurements regularly throughout the production process and to ensure the accuracy of the instruments being used.  In most manufacturing processes, the margin of error is extremely small, and every single component must meet the standard, every single time.

This article is the latest in our Precision Metal Stamping Quality Control series.  Be sure to read our previously posted articles: 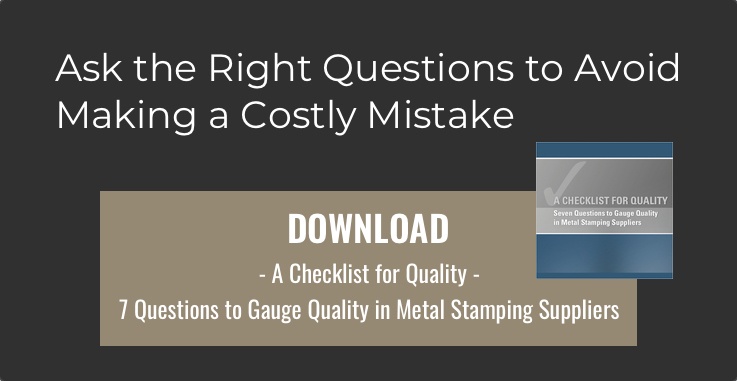