For manufacturers who require precision parts with tight tolerances, it can pay to compare the options for manufacturing processes. Although fine blanking may be the best choice for certain parts requiring edges with minimal break, progressive stamping can replicate many of the same edge conditions while performing multiple operations on one progressive die. The result can be higher production volumes and lower costs.

According to Art Hedrick, author of Die Basics 101 at thefabricator.com and owner of Dieology, “Among the many factors to consider when choosing a production method are the production speeds necessary to produce the required quantity within a given time frame; the material consumption needed for each part; the production method cost; preventive maintenance requirements; equipment availability; and the part shape, size, and geometric tolerance specified.”

When evaluating progressive stamping vs. fine blanking, manufacturers should ask these three questions.

Can slight variances be made to the part’s edge condition without impacting function?

The exact specifications of the part provided by the manufacturer tend to dictate the type of production process used. Fine blanking and metal stamping are evaluated for parts that must maintain robust sidewall features in such applications as gears and levers used in automotive and other industries.

Fine blanking is usually considered for parts requiring specific edge conditions or thicker metal, due to the machinery’s ability to achieve extremely flat surfaces and create sidewall features such as teeth or hooks.

Progressive metal stamping can achieve similar edge conditions to fine blanking, by incorporating pre-blanking, shaving and burnishing into the progressive die, which completes these operations in one press pass.

Often, manufacturers seeking to cut parts costs will look to metal stamping as an option to replace fine blanking. Not all parts that are fine blanked can be converted to a metal stamping, but manufacturers may wish to consider their options by consulting with a metal stamping firm for their engineering expertise and cost estimates. For example, critical-to-function dimensions may not be required on all sides of the part, and slight variances may be tolerated without impairing the part’s function and long-term durability. The metal stamping engineers can provide guidance on whether a fine blanked part might be successfully converted to a progressive stamping, as well as develop prototypes for testing.

Are secondary operations required after fine blanking or progressive stamping?

Although fine blanking manufacturers may offer some progressive tooling operations, such as forms and bends, such capabilities are limited with fine blanking machinery and may require secondary operations in-house or from outside suppliers to complete.

In contrast, progressive stamping can incorporate multiple forming and piercing operations by using a progressive die designed exclusively for the part’s critical dimensions.

Secondary operations that can be accomplished with a progressive die include:

In progressive stamping, the goal is to achieve repeatability and consistent quality by incorporating as many features in-die as possible, which reduces the variability created when going to secondary operations.

What is the total cost of fine blanking vs. progressing stamping?

In general, fine blanking is more expensive than metal stamping due to longer run times. In addition, any time a part needs to move to a secondary operation, costs increase, as does production time. When asking for an estimate on a fine blanked part vs. a progressive stamped part, each firm should provide costs for all the operations required to produce the part to specifications, whether performed entirely in-house or with one or more external suppliers. If the part design allows, precision metal stamping with a progressive die may save significantly on total part costs over fine blanking.

WHAT TO KNOW MORE?

Fine blanking is a high-precision type of blanking, which is the die cutting of the outside shape of a part. Fine blanking uses a specialized metal stamping press that provides equal pressure from both top and bottom on the metal sheet to produce flat edges by cutting the periphery in one stroke.

According to Die Basics 101, “Although fine blanking and GRIPflow® often are categorized as metal cutting operations, they more closely resemble a cold metal extrusion process that creates what appears to be a blanked part. The processes can be defined simply as methods in which a part is squeezed from the strip. Unlike parts made with conventional metal cutting methods, the parts made using fine blanking and GRIPflow have little or no fracture zone. In other words, these parts appear to have smooth, square machined edges. These processes also can produce parts with very close flatness and dimensional tolerances and roughness of about 2 to 3 m, which means that, in many cases, post-processing operations such as grinding and milling can be eliminated.”

Progressive stamping is a high-volume, high-performance metal stamping process that uses progressive dies, which perform multiple operations in one die, often in one pass of the press, such as piercing, forming, extruding and drawing, thereby eliminating the need for separate secondary operations. Progressive dies feed the metal on a strip through different stations of the press, cutting the periphery in sections.

In Die Basics 101, Hedrick explains, “The progressive die is one of the most common, fastest methods available for producing piece parts. Unlike line or transfer dies, progressive dies tie the parts together by a portion of the original strip or coil, which is called a strip carrier. Different types of parts require different carrier designs. Progressive dies can produce as few as seven or eight parts per minute or as many as 1,500 parts per minute. Unlike transfer or line dies, all necessary stations are mounted on a single common die set. These stations are timed and sequenced so that the piece part can be fed ahead a constant given distance called the progression or pitch. Many parts can be tied together allowing many parts to be made with each single press stroke.” 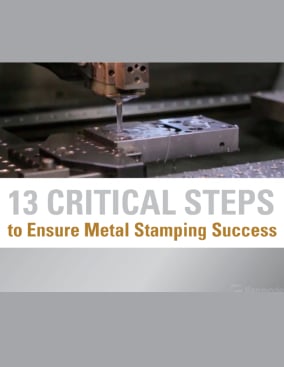