Automotive OEMs Save Big with Switch to Metal Stamping

Metal stamping firms that employ advanced technology such as 3D simulation software and virtual prototyping can complete the evaluation quickly, whether for a miniature part or a large-gauge component.

How Automotive Metal Stampings Can Save Money Over Other Processes

Precision metal stamping technology can perform multiple operations to produce a stamped part using a progressive die, which may replace more costly processes such as fine blanking or metal casting that may require multiple suppliers and secondary operations.

Secondary operations that might be required for fine blanking, which can be accomplished with a progressive metal stamping instead, include:

In a case study on auto brake technology, Kenmode showed how it reduced costs for a complex brake part that had been produced by fine blanking, followed by three operations, which was converted to a metal stamping. Not only did the intricate stamping process reduce the piece price by more than half, but the stamping production also eliminated the need for additional steps and suppliers, which cut production time dramatically.

In another example in the case study, the switch to metal stamping saved 30 percent of the cost of materials and production. The supplier had asked for a quote on a secondary operation that would use metal stamping to stamp and form the end of the tube for a sub-e assembly, which called for expensive metal tubing. Kenmode developed a complex metal stamping that eliminated the need for the tubing, used less costly flat steel, cut out several secondary operations, and maintained the strength of the part.

The cost of materials is particularly critical when precious metals such as gold are used for plating, which is often the case for electrical connections. Metal stampers will look for ways to design the metal stamping strip to minimize the use of precious metals and eliminate waste where possible.

Minimize the use of costly materials in the metal stamping design

Metal stamping engineers will evaluate these and other factors in designing the metal stamping strip to ensure the most efficient production and material usage:

For more information, see our article, Designing the Metal Stamping Strip to Minimize the Use of Precious Metals.

As smart technology used in driver assists, self-driving vehicles, and other sophisticated applications gains traction, automotive OEMs and their suppliers can benefit by working together more closely to turn exciting new concepts into reality.

As with other suppliers, when automotive manufacturers and their suppliers evaluate a metal stamping firm’s ability to produce breakthrough part designs, they should look for advanced technology in use throughout the metal stamping process.

A metal stamper should offer:

Of equal importance is the metal stamping firm’s ability to reduce costs wherever possible, without compromising quality. Savings often can be identified upfront when metal stamping engineers are given the opportunity to consult with the supplier’s engineers on part design and suggest modifications that can cut costs and production time.

To learn how Kenmode has worked collaboratively with automotive OEMs and their suppliers on new product development and to get details on the resulting savings, download our free case study, Converting to Metal Stampings for Auto Brake Technology Drives Innovation, Savings. 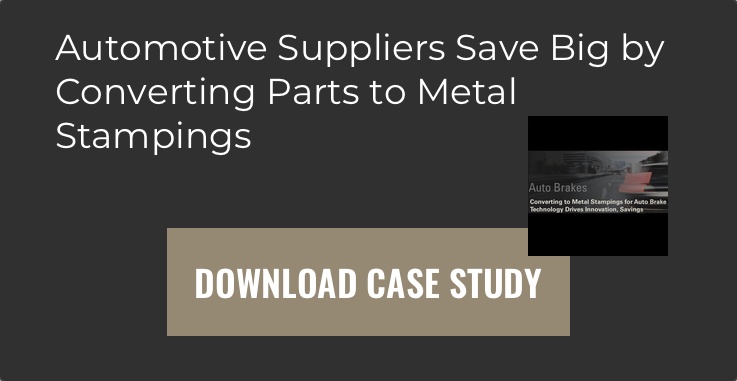